As part of the True Italian Taste Project, the Italian Chamber of Commerce in Canada West has been organizing a series of educational tours to selected regions in Italy for media representatives and influencers. On December 2018, in collaboration with Consorzio Sannio DOP, our media representative, Leeta Liepins, had an unforgettable tour of the Campania region. Article below, published in Vancouver Boulevard Magazine Aug/Sept2019, is written by Leeta about her experience and after thoughts. 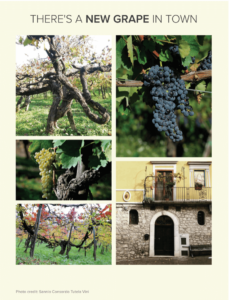 Just back from a whirlwind tour through the Campania region of Southern Italy, and I must say, what an enlightening adventure it was.

While most oenophiles appreciate that this particular region is home to some of the world’s most ancient grape varietals, two emerging and important grapes have captured more than just the imagination of the initiated. I am referring of course to the Aglianico grape and the Falanghina grape.

Nearly wiped out by phylloxera in the late 19th century, the Aglianico grape is once again rising to prominence. The Aglianico is a black grape which, in the right hands, can produce a delicious deep garnet wine. It grows very well in soils of volcanic origin, and the soils of the Campania region have been wonderfully nurtured for this role by the ashes of Mount Vesuvius. Indeed, even the writings of Pliny the Elder and Horace reference the ‘smoky aroma’ of this nectar.

My first introduction to this firm red took place in a century old vineyard picturesquely poised on the slopes of Mount Taburno, the beautiful ‘Cantina del Taburno’. Their signature label, Bue Apis, was savoured in the company of the vineyards farmer, winemaker, and owner. The laughter flowed as easily as the wine, and it all made for a memorable morning in the gracious company of new friends.

The afternoon consisted of a tasting seminar for Aglianico del Tuburna wines from throughout the region. There were 23 wines in total to taste, and the order of the tasting was determined by the vintage of the wine. The contributing wineries ranged from small family owned enterprises whose annual production was on the order of 25,000 bottles; to large commercial endeavours yielding up to 3 million bottles per year.

Large players or small, the passion of the sponsors was universal. To each of them, wine and winemaking is a way of life. While much mirth and storytelling were shared throughout the ‘pomeriggio’, there remained a palpable appreciation and respect for the work of all present.

My next stop was the medieval town of Guardia Sanframondi, in the Province of Benevento, Campania region. Oozing history and architecture dating back to the 12th century, one could easily get lost there both figuratively and literally. My mission however was to discover the fabled Falanghina grape and the wines it yields.

Originally imported from ancient Greece, this yellow skinned grape too enjoys the Mount Vesuvius soil characteristics. It produces a golden, wonderfully light wine that is so easy on the palate.

The past 20 years have seen the Falanghina grape enjoy a paradigm shift in cultivation techniques. Additionally, climate change has increased the temperatures in the region, and this in turn has helped to develop the aromatics of the varietal. Our wine host stated that “In this territory, Falanghina is our gold”. This grape is widely considered to be the best ambassador for the entire wine valley.

Fun fact: Falanghina is the most widely exported wine from Campania. In November 2014, Falanghina was approved as a recognized varietal in the United States. Clearly, its star is on the rise.

As I winged my way back to Vancouver, I pondered the discovery of these two exquisite grape varietals. After tasting the beauty of Falanghina and the richness of Aglianico, I mused on why these wines are not more readily available at the fine Italian restaurants in our city.

Happily, the Sannio Consorzio Tutelo Vini is actively introducing these excellent products to the world. Once tasted, providing enough inventory to meet the resultant demand will prove to be the biggest challenge that they face.

Go to the Article on Vancouver Boulevard Magazine