30 Jul Aerospace: Italy and Canada at the Farnborough International Airshow 2018

Among the countries present at the Farnborough International Airshow 2018, one of the most important world events in the Aerospace industry, the Italian and Canadian representatives of the Aerospace sector could not miss, an extremely important business segment for both countries.

The event was held in Great Britain from July 17 to 22, for the first four days the event was reserved for operators in the sector and, for the subsequent ones, to the general public. The interest in the sector is very high, as shown by the numbers that the FIA manages to achieve in terms of participation by operators. The space research, moreover, is no longer just the prerogative of the military industry, therefore, the presence in Britain of operators in the civil sector was not a surprise. Divided on four large pavilions and several “chalets” occupied by the most important players (Airbus, Boeing, Leonardo, Thales), FIA has seen the massive presence of US exhibitors, who occupied the entire hall 2, French, Mexican, British, Italians and Canadians.

Canada has confirmed its position as a fundamental player at a global level. A 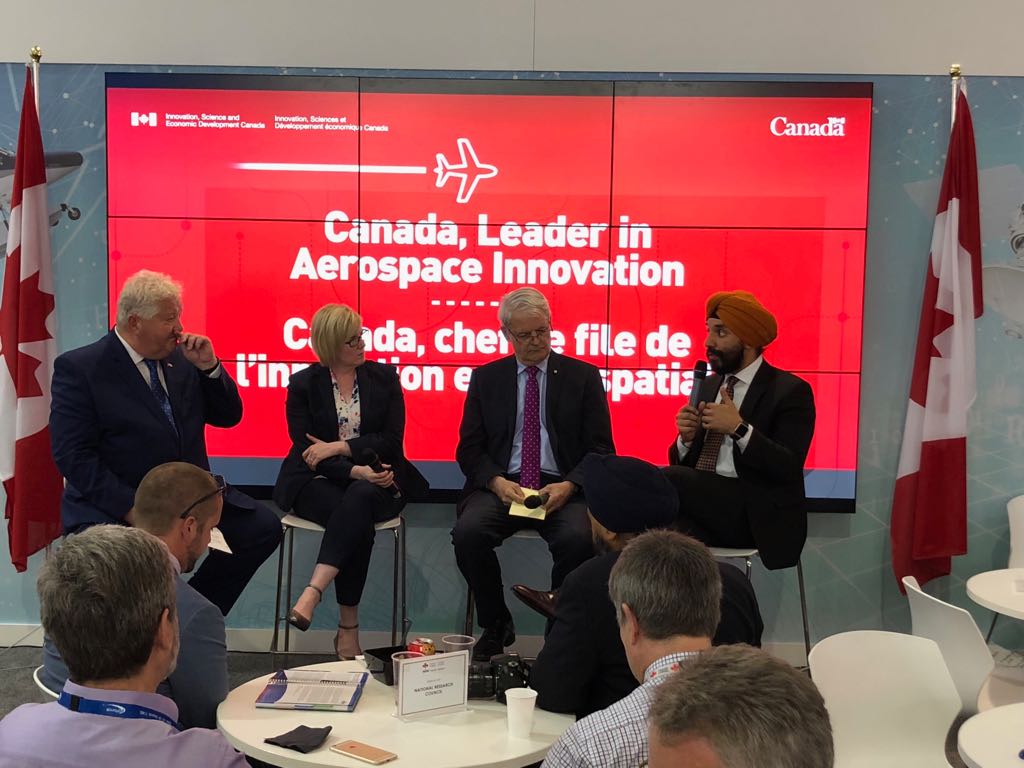 t the stand 4 there were over 100 companies present, divided into three positions: Canada – with an entire sector reserved for operators in Western Canada (British Columbia, Alberta, Manitoba), Québec and Ontario. In addition to the massive presence of operators, it was the presence of the institutions to confirm the attention towards the industry. In fact, on the opening day, a delegation formed by the Ministers of the Federal Government, Navdeep Bains, Minister of Innovation, Science and Economic Development, Carla Qualtrough, Public Services and Procurement Canada, Marc Garneau, Minister of Transport, visited the event, reiterating Canada’s commitment to guaranteeing and promoting the development of the sector, including through the development of international relations and agreements such as NAFTA, CETA and the others that connect the North American country to world economies.

By virtue of the special relations that bind it to Italy, a delegation from Québec carried out a real “Tour d’Italie” through the regional stands: for over fifty years the Délégation Général du Québec has been active in Rome, which monitors and promotes economic relations between the French-speaking province and Italy.

The big Italian players, but also many small and medium-sized enterprises, organized themselves privately or through the stands set up by the Regions of Campania, Emilia Romagna, Lazio, Piedmont, Puglia and Umbria, confirming the Italian leadership position in the aerospace industry and also the interest at institutional level. The Minister of Defense Elisabetta Trenta and the members of the Defense Commission of the Chamber and the Senate visited the Italian stands. Exhibition spaces have been set up for ICE, Ministry of Defense and AIAD whose President, Guido Crosetto, accompanied the minister on the path that led her to meet Italian operators. The 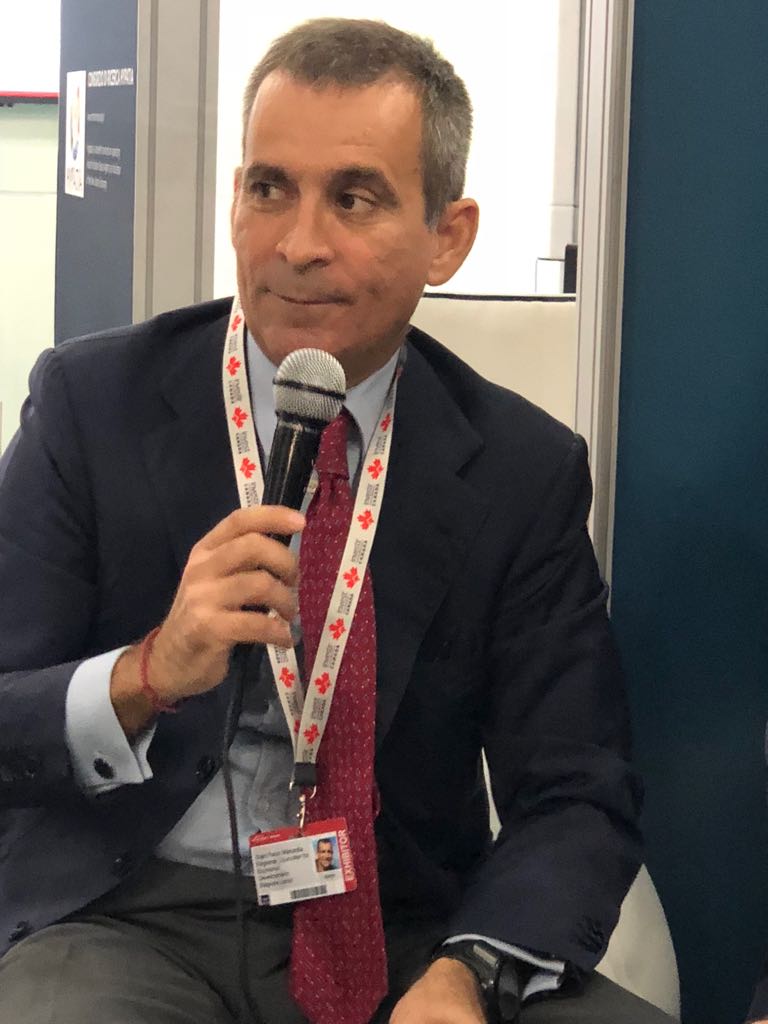 Regions organized operational meetings for the respective delegations and informative moments, open to the public of the exhibitors, on the initiatives and projects of each Region. The Councilor for Economic Development of the Lazio Region Gianpaolo Manzella underlined the numbers and the importance of the sector: “With its 5 billion euro turnover, 23,500 employees and 3,000 researchers, the Aerospace and Safety sector is one of the great riches of our Region. A chain that, alongside the major operators such as Leonardo, Thales Alenia Space, Avio, Telespazio and Elettronica, sees the presence of numerous medium and small companies operating on the technological frontier that the Region supports in major international events, such as the Farnborough International Airshow. [….] Lazio in this sector has a real complete supply chain, represented by universities, large companies, small and medium enterprises, start-ups and spin-offs as well as institutional realities such as ASI or ESA, ready to collaborate for strengthen the sector».

Leonardo‘s participation in the FIA had great expectation and visibility, present with its own Chalet, located at the entrance of the exhibition complex, perhaps the largest of the entire event, in which it was possible to admire the “jewels” of Italian production. Among the institutional delegations that visited Leonardo’sChalet, also the Canadians confirmed the bond with Italy. The interest of Leonardo for Canada has been recently demonstrated with the designation of a Country Manager for Canada, Francesco Norante, who will soon move to Ottawa and will have the task of closely monitoring and coordinating the activities of promotion of all the directions in which the Italian giant is organized. Guest star of the exhibition, among the jewels of the Leonardo’s house, was the helicopter CH 149 (AW 101) Cormorant, the protagonist of a billionaire commission that Canada is preparing to approve, scope of the fleet modernization (maintenance for a period of twenty years ) and expansion program, already composed of 14 helicopters to which will be added 7 units, all committed to se arch and rescue tasks. For Italy this contract has a significant impact in terms of value on exports, R & D and employment level related to the connection between companies in the production chain of Leonardo. Leonardo also aspires to offer its services of excellence (radar, homeland security) by participating in public tenders that will follow the impressive level of infrastructure investments provided by the Canadian Government at the federal and provincial level in the port and airport sectors. This is an ambition supported by CETA, which has opened the way for Italian (and European) companies, allowing them to participate directly in tenders held at federal, provincial and metropolitan level and which, until CETA came into force, were precluded. Leonardo also took the opportunity to celebrate the 70th anniversary of its foundation at the Design Museum in London, where the Centro Studi Italia Canada was also present. During the reception the CEO Profumo has briefly summarized the great steps taken by Leonardo, presenting then the projection of a video celebrating the 70 years of history.

The delegation of the Centro Studi Italia Canada at the FIA met institutional representatives, Italians and Canadians, including Rupert Potter, Representative for Europe of the Commerce and Investments Department of British Columbia and Betty Jandewerth, Director of Commerce and Investments of Alberta, John Anthony Coleman, Delegate of Québec in London, Suzanne Benoit, President of Aero Montreal, Noemi Julien, Chief of Staff at Invest in Canada, the newly establishedAgency whose objective is to promote investments in Canada. Particular attention was given to the Italian and Canadian companies, some of which are already active in their respective markets, others interested in establishing relationships, considering the similar business fabric that, beyond the big players, characterizes the two countries.

At the FIA event, important moments of relationship were held on the occasion of the receptions kindly offered by the Embassy of Italy in London and the Embassy of Canada, in the beautiful setting of Canada Place in Trafalgar Square.

The state of the aerospace industry in Canada and Italy

Canada, in the AIAC 2017 annual report (Aerospace Industries Association of Canada), occupies the third position in the worldwide production of civil aircraft, engines and flight simulators, and registers investments of $ 1.8 billion in R & D, equivalent to about a quarter of Canada’s total R & D investments. An industrial sector which, in 2017, contributed about $ 25 billion to the GDP and 190,000 jobs to Canadian employment.

According to the data made available by AIAD (the Federation, a member of Confindustria, of the Italian companies for Aerospace, Defense and Security), the aerospace sector employs over 50,000 employees of the estimated 200,000 for the entire Italian territory supply chain and is a major sector in Italy, characterized by high labor productivity and capital intensity, long investment cycles and high levels of R & D spending (second sector in Italy, almost € 1.5 billion, equivalent to 12% of total expenditure incurred by Italian companies in the aerospace).

FOR THE REFERENCES PRESENT IN THE ARTICLE:

The meeting of the Delegations of Québec in Europe

Aerospace: an entrepreneurial delegation from Québec on an international mission to Italy

Aerospace industry: the next challenges and the opportunities for synergy between Italy and Canada